You must be 21 years old to checkout the Sandhills' Finest.

Yes I am
Not yet

Today’s Proudly Not Made By Robots feature is the magic man: Mike Klimek. A native of Ord, Mike is one of our founding partners and our Chief Brewing Office. I met Mike eight years ago as he and his wife Julie were making the move back to Ord. Our early conversations involved homebrewing and the possibility of opening a brewery. During those initial hangouts, he called me crazy more than once. But I was right about one thing: Mike brewed world-class beer as a homebrewer. He had 22 local, regional and national homebrewing awards under his belt before we opened SBC. He was a meticulous homebrewer. He appreciated (and still does) the precision of his process and the technicality and science behind quality beer creation. I was adamant that we could create something special given his talents as a brewer. Now after five years as our head brewer, he’s knocking out premium beers appreciated by thousands of Nebraskans.

If anyone was made to brew beer, it would be Mike. He excels at recipe creation and consistency between each batch. If anyone has seen our brewhouse, they know how talented he is to consistently reproduce the many delicious flavors found at SBC. I’ve been lucky enough to witness that level of technical competency pay forward and encourage others to pursue careers and interests in the beer industry. His efforts have resulted in two professional brewers learn under his tutelage, and helped encourage the establishment of two commercial hopyards in Valley County.

He told me years ago he wanted to leave a legacy like his father, and I can assure you all that’s exactly what he’s doing with his work at Scratchtown. Not only has his beer put Ord on the national map, he’s transforming our community through fermentation. It’s been an honor and a privilege to work next to him. So let’s get to know him:

What is your favorite SBC beer? Non-SBC beer? I probably drink more Hot Iron than anything else. Odell’s Friek is my favorite non-SBC beer.

Think back to your most memorable brewery experience: where and why? Coors in Golden, Colorado, early 1980’s. It was my first exposure to brewing and every so often, a smell while I’m brewing at SBC takes me back to that day.

What do you do at SBC? Head brewer, taproom shifts every so often.

What is your favorite SBC event? Scratchtoberfest!

What is one hobby you enjoy in your free time? I want to learn to make the perfect bread.

If you had a year to go on an adventure, where would you go and why? Europe. A chance to experience many cultures, brewing and food scenes.

Who is your favorite Star Wars character? Yoda. He’s wise but doesn’t take himself too seriously.

What bit of advice would you give your 18-year old self? You don’t have to know your life’s entire path today.

What do you want to be when you grow up? 6-feet tall and well-rested.

What is your favorite thing to do in nature? Lake time, sitting on a beach, staring at a fire and poking it with a stick.

What do you like best about SBC? I get to express my creativity and see the direct result of my work. 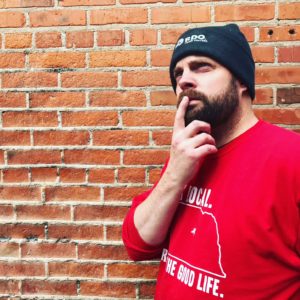 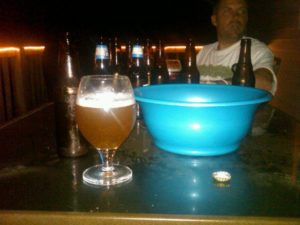 Bonus photo – the evening Caleb and Mike agreed to start SBC together.